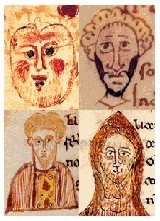 The special projects vary from year to year. Our first was the purchase of a rare and valuable incunable, the 1485 edition of Platina’s Vitae pontificum, to commemorate the Institute’s long-time assistant librarian (1966-1980), Mrs Lorraine Egsgard, who died in February 1991 at the age of 91. Subsequent acquisitions have included a broad range of resources of interest to scholars and students in medieval studies:

In 2003 the Friends purchased a state-of-the-art digital microfilm reader-printer for the Institute Library. The scale of this project has entailed a two-year fund raising initiative.

Fons et origo: The Charter of the Friends

In the words of the late Reverend Laurence K. Shook, CSB, the Library of the Pontifical Institute of Mediaeval Studies is “a cultural collection of magnificent proportions.” In fact, it is one of the premier collections of materials relating to the study of the Middle Ages in North America. The Friends of the Library association was founded in 1991 with the primary goal of maintaining and enriching the collection for future generations of students of the medieval period.

Objectives of the Friends

1 To organize an active group of supporters.
2 To establish and build up a capital fund.
3 To raise funds in order to undertake an annual special project.

The Friends of the Library Committee invites volunteers to join and participate in the various endeavours, which include such functions as lectures, the Mediaeval Book Fair, an annual Christmas tea, and the publication of our newsletter Amici. Volunteers are also needed to assist the librarians on a weekly or bi-weekly basis. For more information please speak to one of the librarians.

We have been making our appeal known to the Institute’s current and past faculty, students, and friends; the warmth and generosity of the response has been most encouraging. We hope you, too, will support our work.

To become a Friend, please print and fill out the online PDF form, checking the appropriate category.

For further information, please write to us at <fotl@chass.utoronto.ca>. Contributions are tax deductible for both Canadian and US citizens.

Your generosity is acknowledged in our annual report. Please let us know if you prefer to remain anonymous. Thank you for your support.

One of the most important and consistent expenses of the Pontifical Institute Library (indeed, of any library) is the annual subscription to a great number and variety of journals. These journals offer newly edited texts, articles, reviews, and bibliographies, as well as information on conferences, exhibitions, and new books in medieval studies. In the past several years, the Institute Library has decided to cancel subscriptions for many journals received by other libraries within the University of Toronto. Although the Library does not at this stage propose to cancel more journals, their increasing cost represents an ever-greater strain on the over-all acquisitions budget.

To help release funds for the acquisition of essential books, we have established an adopt-a-journal programme. We urge Friends to consider augmenting their membership donation by contributing the annual subscription fee for a journal. In return, we will acknowledge the adoption with a book-plate in the journal and with a tax receipt. To receive further details on the programme and a list of journals available for adoption, please write us at the address above or by email to <fotl@chass.utoronto.ca>.

Lectures Sponsored by the Friends

The enterprising series of lectures sponsored by the Friends began in the Fall of 1993. The lectures, now delivered in the fall and spring each year, have engaged an extraordinary group of scholars from a variety of disciplines and reflecting many of the areas of interest of the library's patrons.

William Sheehan (Vatican Library) delivered the first Friends lecture in memory of Leonard Boyle in the Fall 2000; the second lecture was delivered by William P. Stoneman (Harvard) the following year.

A full list of the Leonard E. Boyle lectures:

Each fall, the Friends sponsor a lecture by local medievalists working in a range of areas, and hosts its ever-popular Christmas Tea and raffle. All are welcome! Please consult the Calendar for details of all events.